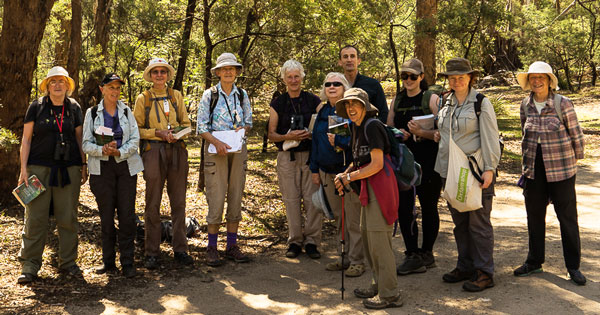 We were rewarded with magnificent views of Lake Burragorang and Coxs River with surrounding slopes of the beautiful Blue Mountains. The bush was refreshed by recent rains and plant sightings included Eucalyptus agglomerata, Eustrephus latifolius, Acacia elata and Rupicola sprengelioides (specific to McMahons Lookout) to name just a few.

This latest survey was done in summer to ascertain any differences. The number of species found growing both in winter and summer was 45. From the winter survey, 23 species were seen and from the summer survey 37 species.

From the summer survey 10 new species were seen. There were what appeared to be some discrepancies but some of the reasons are:

Those present had a wonderful time identifying and recording. We now have a slightly larger database to pass on to BMCC and the Bushcare Group and it will be interesting to do further surveys for comparison. 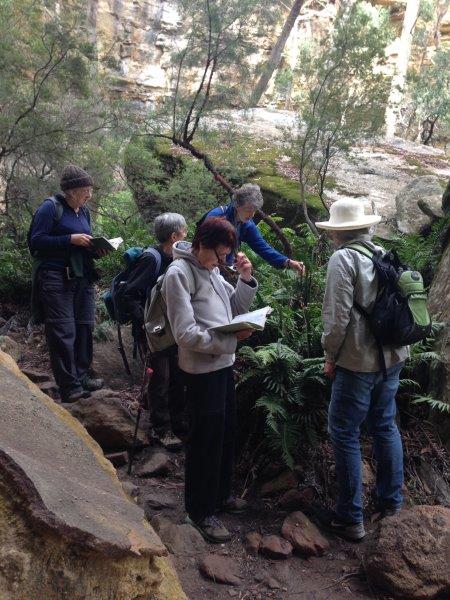 After looking at stencils in ochre on the cave walls and reflecting upon the traditional owners’ way of life many years ago we immersed ourselves in eucalypt ID. Eucalyptus cannonii was new to us; it is a listed vulnerable species. We found a lovely population of Eucalyptus rossii growing on a rock platform along with Cassinia arcuata which is spectacular to look at, however is a native plant classed as Noxious, Class 4.

The biggest ID challenge was of four Asteraceae species, which were all in flower – so helpful of them! On the way home we stopped to enjoy views into the wonderful Wolgan Valley.

Radiata Plateau, Katoomba (Carpark to the Northern Dam) – led by Ray Stanford – 9 present
This part of the sandstone plateau is dominated by Eucalyptus sieberi and Eucalyptus piperita, especially on the higher section which also supports an understory of Hakea, Leptospermum, Acacia and various herb species.

The lower section is an abrupt change including a creek which enters a man-made dam. This lower section includes Eucalyptus mannifera subsp. gullickii and many changes, for example, Grevillea laurina to Grevillea acanthifolia and Leptospermum trinervium to Leptospermum grandifolium, while the damp soil above the dam supports many species such as Gahnia sieberiana, Lepidosperma sp. and Drosera spatulata.

This 1 km track has a huge variety of plant species within two main communities.

Martins Lookout, Springwood – led by Helen Yoxall – 6 present
The eucalypt woodland along the fire trail from the end of Farm Road, Springwood to Martins Lookout is part of the Glenbrook Creek catchment. We began by spending time observing the general structure and the dominant tree species of the vegetation community - Eucalyptus punctata, E. globoidea, Corymbia gummifera, Syncarpia glomulifera and Allocasuarina littoralis. Jess showed us the online resource SCIVI (Southeast NSW Native Vegetation Classification and Mapping), available through the SEED Portal, which indicated that the vegetation type predicted to occur where we were walking was Sydney Hinterland Transition Woodland.

On this mild autumn day sitting at the Lookout for morning tea, looking across at the Lost World, we heard the call of honeyeaters on their annual migration and were lucky enough to glimpse the brilliant red of a Mistletoe Bird.

The survey site was about a hectare of remnant eucalypt woodland bounded by built-up areas, woodland that is being regenerated, and a silt flat. There had been substantial degradation of the survey site historically, but the ecological status of it is now quite high. For example, only 8 of the 80 plant species we recorded are weeds, and the abundance of them is very low.

Three decades of inspirational work by the PGBG has enhanced the importance in the landscape of the site we surveyed. It now is an integral part of a regenerating landscape instead of being a fragment of degrading bush. Surveying the site was an ideal activity for the Plant Study Group – not to mention being enjoyable.

Braeside Walk, Blackheath – led by Fiona Vaughan – 9 present Scheyville National Park – bus trip led by Meredith Brownhill – 14 present
Scheyville NP is a complete contrast to our familiar Blue Mountains’ Parks. Fourteen members had a fascinating day learning about regeneration strategies from the NPWS Bush Regen co-ordinator and Ranger. Given the areas of grassland and old pasture within the NP, it was most encouraging to learn of the positive outcomes achieved and of the regeneration of regrowth native woodlands.

Cumberland Plain Woodland is a Critically Endangered Ecological Community on shale under the BCA and EPBC Act. Scheyville NP is known to be one of the best sites of remnant CP Woodland.

The Eucalyptus moluccana woodlands were new to us and a range of Cumberland Plain low shrubs, herbaceous plants and grasses were of interest. We walked on the Scribbly Gum path and identified the Scribbly Gum as Eucalyptus racemosa ssp. racemosa. Dillwynia tenuifolia a listed Vulnerable Threatened Species is present.

The last stop was at the Lagoon, which had some water in it after recent rains. The dominant species here is Casuarina glauca which forms the Coastal Swamp Oak (Casuarina glauca) Forest of NSW Endangered Ecological Community. 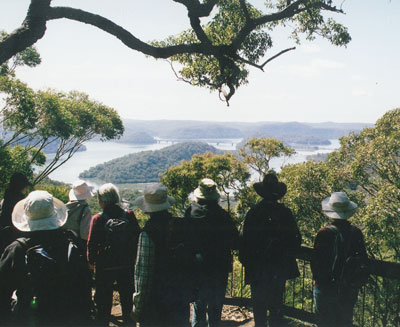 NPWS provided three Discovery Volunteer Guides to take us along the Bird Gully Walk and to a lookout with lovely views of the Hawkesbury.

The vibrant vegetation is a good representation of Hawkesbury Sandstone vegetation and is species rich with tall dense shrubs.

Flowering shrubs we saw were Banksia ericifolia with long orange flower spikes, Eriostemon australis in full flower, Phyllota phylicoides and other Fabaceae. The shrub layer had masses of tall white Epacris microphylla and Leucopogon microphylla, plus Boronias and tall Petrophiles.

We had a relaxing walk with well-informed guides and thoroughly enjoyed the bus trip and visit.

The reserve is very well managed by NPWS and visitor impacts are minimal – if only our Blue Mountains NPWS had the resources for such good care of our National Parks.