Why Protect The Gardens Of Stone? 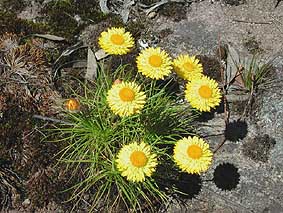 Pagoda Rock Daisies  (Leucochrysum graminifolium)
The Gardens of Stone is a lost world – scenic and unique in its geological complexity and depth of diversity.

It is a land of rock pagodas, natural sandstone pinnacles, endangered ecological communities and threatened plant and animal species.

This area should be protected for its conservation values under the National Parks and Wildlife Act.

The sandstone pagoda landscapes extending from Newnes Plateau to the Capertee Valley are generally regarded as the most impressive, well-developed and accessible in the area. This is where the 'platy' pagoda with its distinctive ironstone banding is particularly prevalent. About half of the 60,000-hectare platy pagoda heartland is protected within the Greater Blue Mountains World Heritage Area, yet the remaining half is in Mugii Murum-ban State Conservation Area and the unprotected Gardens of Stone Stage Two area.

This pagoda terrain is significant for the local ecology, with the rare Pagoda Daisy found only in this habitat. The intricate, rocky topography that it creates - of ledges, overhangs, caves, cracks and chasms - provides a complex variety of habitat, moisture and microclimate. Lichens, mosses, vascular plants and wildlife all exploit this diversity, shown by the prevalence of Rock Warblers, Lyre-bird nests and the plant 'community'.

The pagoda land system of all three elements (pagodas, steep slopes and valley floors) is necessary to support the animals which live and forage there.

The complex topography creates a diversity of exposure across the area, from sheltered canyons to exposed plateaus and hill tops. These in turn promote a variety of ecosystems, plants and animals.

The Proposal would protect more than 1,000 plant species and many plants and communities that are threatened, have limited distribution and are outside the current reserve system.

The Proposal would protect at least 319 vertebrate species, including 40 threatened species and two endangered invertebrates. 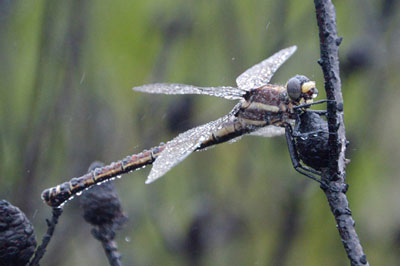 Marsupials populate the open woodlands, while birds and reptiles are more prevalent amongst the shrub heaths, along escarpments and in gullies. These areas provide habitat for amphibians and small mammals, while birds benefit from the shrub thickets and rock recesses.

The upland peat swamps are a significant feature of the area and classified as endangered under both state and national legislation.

The swamps, dating back to 10,000 years, are a key habitat for a variety of flora and fauna, including the endangered Blue Mountains Water Skink and Giant Dragonfly, as well as several threatened plant species.

Classified as Newnes Plateau Shrub Swamps and Newnes Plateau Hanging Swamps, the majority of swamps (490 hectares) are at risk and lie unprotected, with many of the areas best swamps in the headwaters of Carne Creek area (Newnes Plateau).

Swamps play an important role by slowing down and filtering water.

The Gardens of Stone Stage 2 reserve proposal contains identified wilderness within Newnes State Forest. This wilderness would make a significant contribution to enhancing the protection of intact ecosystems contiguous with the Greater Blue Mountains World Heritage Area. It was not included in 361,000 ha wilderness declared within Blue Mountains and Wollemi National Parks in 1991 which was the largest formally protected wilderness in Australia

Totalling 55,000 hectares, over 70 percent of the Gardens of Stone area remains unprotected and threatened by mining.

The Gardens of Stone area is also important for the role it plays in providing drinking water supplies, locally and to Sydney's drinking water catchment. 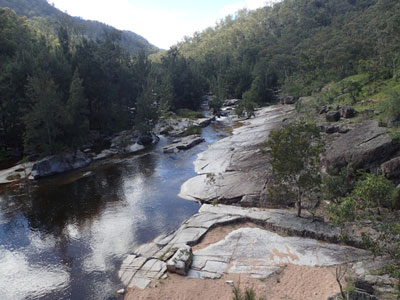 Coxs River  (Philip Jackson)
The Coxs River rises in the western part of the Gardens of Stone unprotected area then flows through the Greater Blue Mountains World Heritage Area to Lake Burragorang, which is Sydney's major drinking water supply and storage. This catchment area is protected through legislation.

The Coxs River provides 30% of the water in Warragamba Dam. The boundary of Sydney's drinking water catchment is shown on the Society's Area of Interest map.

The water from Warragamba is used by 4.5 million people living in Sydney and the lower Blue Mountains. You can learn more about Sydney's drinking water area here.

A recent court challenge by environmental organisation, 4nature, sought to strengthen these protections. You can read about 4nature's court action and the outcome here.