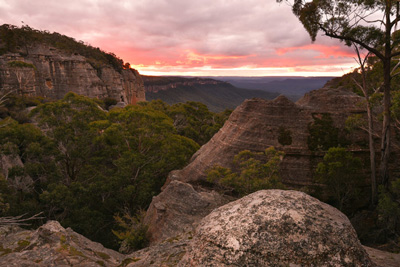 Pagoda Sunset  (Simon Lynch)
The Gardens of Stone National Park was declared in 1994 and covers 15,130 hectares. It joins Wollemi National Park on the northern part of Newnes Plateau.

It has as its core the spectacular mesa of Pantoneys Crown (1,020 metres high), a former nature reserve, which rises from the floor of the Capertee Valley, the largest enclosed valley in the Southern Hemisphere. Pearsons Lookout on the Castlereagh Highway provides a spectacular view over the valley.

Gardens of Stone National Park is one of the seven national parks, which together with Jenolan Karst Conservation Reserve, make up the million hectare Greater Blue Mountains World Heritage Area.

The park has a few four-wheel drive tracks which also provide good walking opportunities. The Devonian limestone outcrops around Crown Creek are another key feature of the park – they support a rare grassy White Box woodland with spectacular grasstrees and even spinifex.

For more information about visiting, go to National Parks and Wildlife Service. 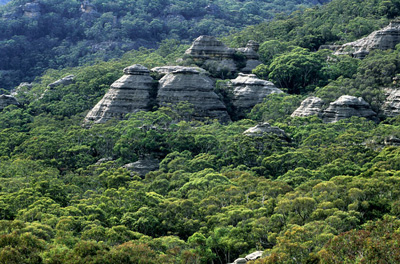 Genowlan  (Jamie Plaza)
This 3,650 hectare park was declared in 2011 along with approval for underground coal mining.

Genowlan Mountain is a majestic sandstone promontory, with hundreds of pagoda formations, that rises more than 500 metres from the valley floor. A hotspot for biodiversity, it is home to more than 340 plants and 75 mammals and birds.

Mount Airly lies to the west of Genowlan Mountain, separated by Airly Gap. The underlying oil shale deposits were developed for oil export by individual miners in 1893, with extraction occurring on the slopes of Airly Gap and the western side of Mount Airly. The spectacular setting of the ruins provides dramatic valley views, surrounded by cliffs and pagoda scenery.

Near Airly Gap is New Hartley 'ghost town', an outstanding cultural heritage site with remnants of tunnels, cableways, shale oil vents, steam engines, stone dwellings, transportation and mine ventilation chimneys. Great examples of their kind, these ruins should be placed on the NSW State Heritage List.

For more information on visiting MMSCA you can purchase our GoS Visitors Map and visit National Parks and Wildlife Service.