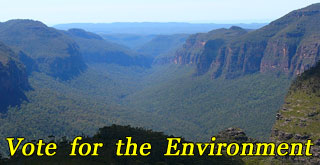 A brief summary of the Society's Vote for the Environment Campaign in the NSW State Election 2015, plus the outcome of the election. 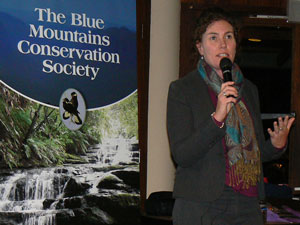 Ms Doyle received 58% of the vote after the distribution of preferences. Roza Sage, the Liberal candidate and incumbent received 42%.

Here's the NSW Electoral Commission's summary from the 2015 Election and the 2011 Election.

A key difference in this election was the allocation of Greens preferences, which were not given in 2011. Without these preferences the election would have been far closer.

The Society’s Vote for the Environment Campaign endeavoured to put both local and state environment issues on the agenda, and make people consider these when deciding who they were going to vote for.

With the full support of the Society's Management Committee, a campaign team led by Craig Linn was put together in July 2014. The team also included the Society's President and Senior Vice-President - Alan Page and Tara Cameron.

Key activities in the campaign were -

Both meetings were videoed by the talented Gary Caganoff and placed on our website.

We are unsure of the effect we had on the election, but we needed to highlight the environmental differences between the candidates. And this we achieved.

Here are the 9 Blue Mountains Gazette ads. Click the image to see a lager version. 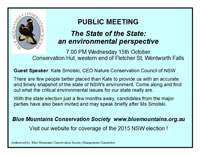 8 October 2014
State of the State Meeting 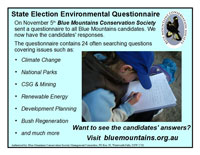 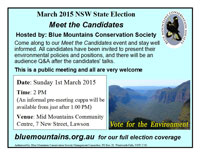 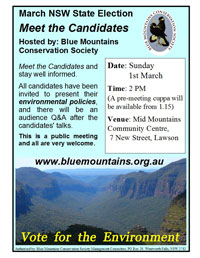 4 March 2015
Vote for the Environment 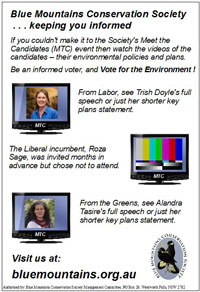 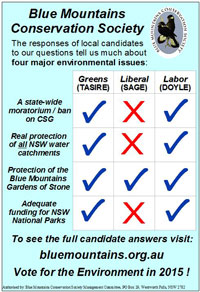 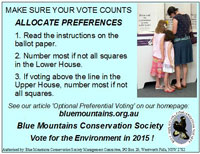 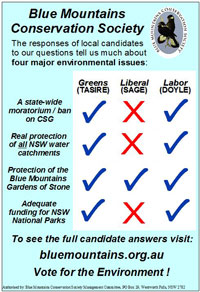