This article first appeared in the March 2018 edition of the Society's Hut News. It is part of a series about threatened species. 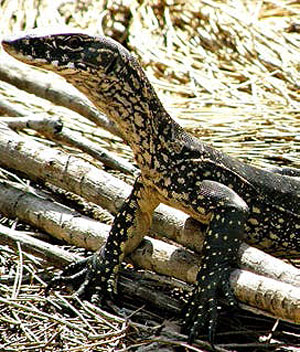 The Lace Monitor, easily the largest of the three, is widespread and common. At home on the ground and in trees, it is the goanna of camping grounds that is bold enough to search tents for food.

The other two species are rarer, more elusive, and usually keep to the ground. Gould’s Goanna inhabits the drier, more northerly parts of the WHA. The Heath Monitor occurs at scattered locations and reaches its northern limit along the southern escarpment of the Hunter Valley.

Apparently, the Mount Riverview ridgeline was, before the houses appeared, a good place to find Heath Monitors.

The Heath Monitor is the only one of the three which is threatened - it is a Vulnerable Species in NSW. When seen in the bush it has a bright, speckled appearance. 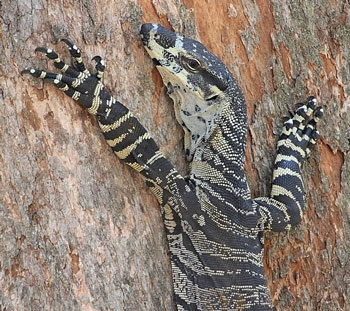 Lace Monitor (up a tree and showing the banded arm pattern)  (Peter Smith)
It frequents shrubby dry sclerophyll forest on sandstone ridges and plateaus which, covering three quarters (73%) of the WHA, is the most common habitat in the area. And yet, the Heath Monitor is a threatened species.

It shelters in burrows (which it digs), hollow logs or rock crevices. It requires terrestrial termite mounds in which to lay its eggs, possibly the availability of termite mounds is a limiting factor.

The three goannas can be distinguished by the differing yellowish patterning on their face, limbs and tail.

Records of the Heath Monitor in the WHA are few, maybe they are more abundant than we think because they are sometimes mistaken for small Lace Monitors?