This article first appeared in the October 2017 edition of the Society's Hut News. It is part of a series about threatened species. 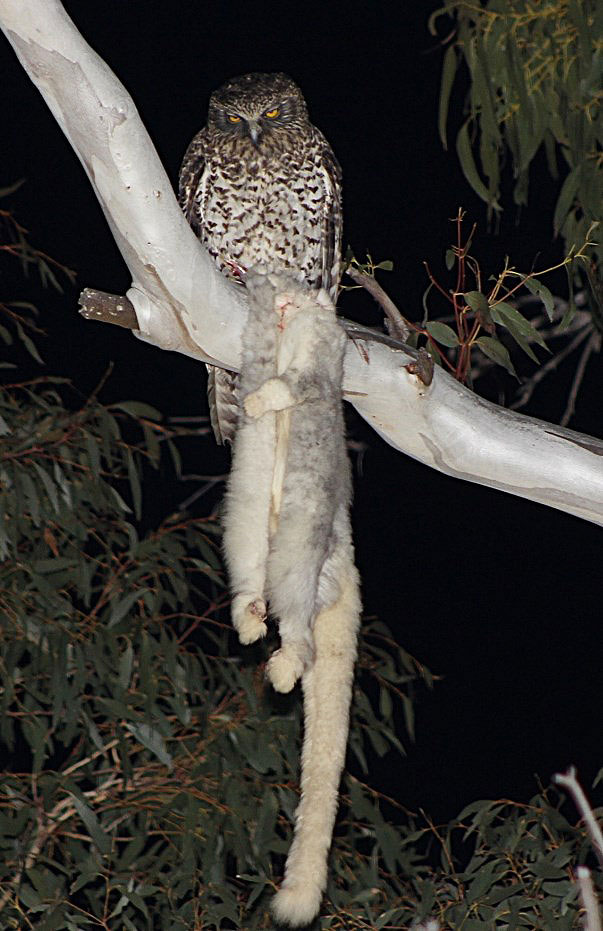 The Greater Glider is sedentary within a small home range, whereas the Powerful Owl ventures more widely into neighbouring drier forest to feed.

Powerful Owls in the Blue Mountains have increased greatly since the 1980s. We are not sure why. Their resounding “whoo–hoo” call is now frequently heard in gullies and valleys, the higher pitched calls of the female sometimes alternating with the deeper calls of the male during the autumn-winter breeding season. The Greater Glider is faring less well locally. Their sluggish behaviour, a consequence of a diet of low energy eucalypt foliage, and their large reflective eyes make them a relatively easy animal to survey.

Over the last decade they have declined markedly at lower elevations, most likely due to increasing temperature and associated effects.

Feeding Greater Gliders select younger eucalypt leaves, which are more nutritious than older leaves. Supplies of young leaves may well be limited during times of prolonged heat, drought and wind.

The Powerful Owl commonly preys on Greater Gliders, which are not much smaller than itself. The photographed pair were in Gillindich Nature Reserve, to the south-west of the Blue Mountains, several weeks ago. A little gruesome, but removal of the glider’s head is typical Powerful Owl feeding behaviour. In this instance a ‘pale phase’ (grey to white) glider was captured, rather than the more usual dark phase (black above, white below) form.

Before we came across the pair we had not heard or seen Powerful Owls but had noticed that the Greater Gliders were being rather skittish – in future we will pay more attention to skittish behaviour.

Near to the owl glider pair a second dark Greater Glider was silently watching, one can only guess what it might have been thinking.