This article first appeared in the June 2018 edition of the Society's Hut News. It is part of a series about threatened species. 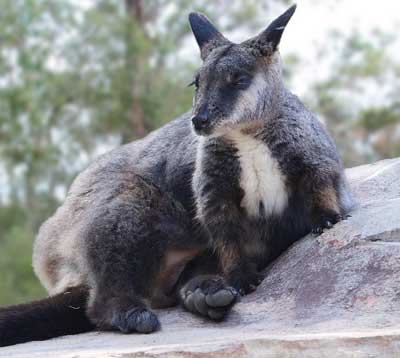 he relatively short hind feet have much reduced claws but the soles of the feet are equipped with outstandingly large granulated pads. It is as if this wallaby is born wearing a pair of volley sandshoes, ready to scale the cliffs and steep rocky areas it inhabits.

This wallaby forms small colonies and typically shelters by day in overhangs on north facing cliffs and rocky slopes, moving out in the afternoon and evening to feed in nearby grassy areas. In the late 1800s it lived along the Nepean River.

At Jenolan Caves, Sid Bellingham, a local hunting guide, noted in 1899 that the Brush-tailed Rock-wallaby was “at one time plentiful”, “the Grand Arch and other outside caves were simply the camping place of rock wallabies” and “afforded good lively shooting”, but the species was declining by the late 1800s.

The Brush-tailed Rock-wallaby has suffered widespread population declines and extinctions and is now considered to be endangered in NSW and vulnerable at national level. In the WHA it is now a rare resident at the western edge of its current known range, it formerly extended into inland NSW. A stronghold for the species is northern Wollemi and Yengo NPs, where there is suitable habitat across the escarpment of the southern Hunter Valley.

Other recent locations in the WHA include north of Faulconbridge Point Lookout in Blue Mountains National Park, the Wollondilly River catchment in Nattai National Park and, as a result of careful management by the NSW National Parks and Wildlife Service, it still frequents the Jenolan area, including the main tourist precinct. Possibly it persists in Kanangra-Boyd National Park, where it was last sighted near Church Creek Caves in 1989.

In the early 1870s Brush-tailed Rock-wallabies were introduced to New Zealand from Australia and have since prospered, to the point of becoming a local pest. Recent molecular genetic studies indicate that these ‘Kiwi’ animals most likely originated from a population at Winmalee (probably from within what is now Blue Mountains NP).

Given the sorry state of the Brush-tailed Rock-wallaby around Winmalee today, the naturalised New Zealand population represents a potentially valuable conservation resource for Australia.