The area known as the Gardens of Stone, skirts the western edge of the Greater Blue Mountains World Heritage Area in NSW. It is a beautifully unique and scenic landscape widely recognised as an iconic area that must be protected.

It is home to literally hundreds of native plant, bird and animal species; some of which are threatened to extinction. The spectacular assemblages of rock formations dotted across the landscape are known as pagodas and are recognised as 'internationally significant'.

The Gardens of Stone remains under threat from open cut coal mining. 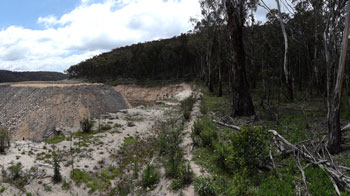 The best known and most recent proposal was that by Coalpac Pty Ltd to join its existing Cullen Valley Mine and Invincible Colliery operations and expand into Ben Bullen State Forest.

This mine would have demolished 800 hectares of forest and excavated a massive pit up to the base of the pagoda clifflines.

Over 700 individual submissions were received objecting to the proposal and on 4 October 2013, the Coalpac open-cut coal mine in Ben Bullen State Forest was recommended for refusal due to significant rock formation and biodiversity impacts.

The Executive Summary of the Department's assessment stated that "that the conservation values of the site as a whole are significant, and that the project (in its current form) would essentially destroy these values, and significantly compromise the conservation significance of surrounding areas".

In a significant step, Coalpac withdrew this application on 24 October 2013 following a recommendation by the Department of Planning that the mine be refused and Coalpac went into receivership.

This followed a significant and long running campaign by the Society and other environment groups against the mine.

The withdrawal of the mine proposal is exciting but unfortunately, the threat of open cut mining remains.

Coalpac may be purchased and the new owner may extend their current mines.

Similarly, the Pine Dale Yarraboldy extension by Enhance Place Pty Ltd (now Chinese-owned Energy Australia) is planned for a different section of Ben Bullen State Forest. This could destroy up to 500 hectares of precious pagoda country.

Open cut coal mining would exterminate all plants and wildlife within the pit area including lyrebirds, squirrel gliders, quolls and wombats.

Spectacular cliffed escarpments could be undermined using highwall methods, destabilizing the pagodas and risking their partial or complete collapse.

We need to protect this precious pagoda country for the future.

﻿
© 2022  Blue Mountains Conservation Society Inc.
We acknowledge the traditional custodians of this land
– the Darug and Gundungurra people –
and pay respect to their Elders past, present and emerging.