After two years of litigation, the Blue Mountains Conservation Society has reached a settlement with Delta Electricity regarding water pollution in the Coxs River. Here's a joint statement.

The Society and Delta Electricity have agreed to discontinue the legal action based on the following:

This is a great step forward and follows years of hard work by the Society, the Environmental Defender's Office and our barrister Tom Howard who acted pro bono.

We will now be working hard to make sure that the EPA sets appropriate limits on the pollutants.

The Society also hopes that the case will bring improvements to pollution licensing practices more generally in NSW. 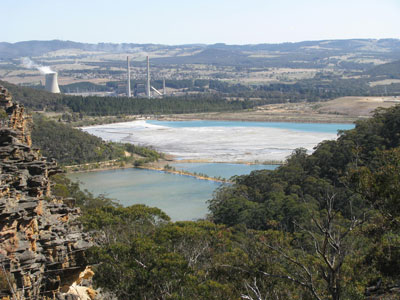 The water was then independently tested by Dr Ian Wright from UWS revealing of aluminium, arsenic, copper, nickel, zinc, boron and fluoride in the water.

His report stated that -

The Society brought this matter to the attention of the Sydney Catchment Authority, the Minister for Environment, and the Department of Environment and Climate Change. DECC advised in April 2008 that it did not intend to prosecute Delta for water pollution offences.

As the regulators were not taking any appropriate action, the Society felt that it must take action itself. 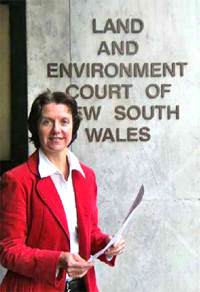 Tara Cameron,
Society President 2008-11
Running such a case had the potential to bankrupt the Society, so our legal team argued for a "Protective Costs Order" to limit the costs upfront to $20,000.

This was successful and was a precedent for a "public interest" case in NSW (September 2009).

The legal representatives of Delta Electricity lodged an appeal against this decision but their appeal was unsuccessful (October 2010).

Delta then attempted to have the case dismissed.

On 2 December 2010, Justice Rachel Pepper of the Land and Environment Court heard an application by Delta to have the case summarily dismissed, under Rule 13.4 of the Uniform Civil Procedure Rules 2005. That rule enables the Court to dismiss the proceedings if the proceedings are frivolous or vexatious, or no reasonable cause of action is disclosed, or if the proceedings are an abuse of the process of the court.

This was rejected in August 2011 allowing the case to continue.

Mediation between the Blue Mountains Conservation Society and Delta Electricity occurred on 11th of October 2011.

﻿
© 2022  Blue Mountains Conservation Society Inc.
We acknowledge the traditional custodians of this land
– the Darug and Gundungurra people –
and pay respect to their Elders past, present and emerging.