This article first appeared in the September 1972 edition of the Katoomba & District Wildlife Conservation Society's Newsletter - an early name of our Society.

The article is presented here as it first appeared nearly 50 years ago. The supporting images are new of course, and footnotes have been included to provide changes to botanic names, and the status of species. 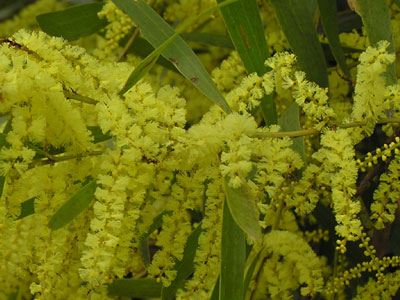 Sydney Golden Wattle (Acacia longifolia)  (Alan Page)
From Emu Plains to Lithgow, from Richmond to Hartley, Wattles grace the bushland, especially in Spring and Summer months, with the abundant yellow-gold of their bloom.

Wattle Day and the Wattle League have passed out of fashion, but wattle is still Australia’s national flower, and the hundreds of species are widely spread in every State.

Wattles are Acacias, but in the early days of settlement the pioneers formed their wattle and daub huts from the tough pliant branches of some of these plants.

On the mountains there are many beautiful species. Some of those lining the roads today are garden escapes. Of these the Queensland Silver Wattle, Acacia podalyriifolia 1, near Blaxland and Warrimoo, and A. baileyana 2, the Cootamundra Wattle in various parts, are outstanding.

Considered as garden plants Acacias are out of favour with some because of their short life span. However, they repay by providing very quickly a wealth of bloom. 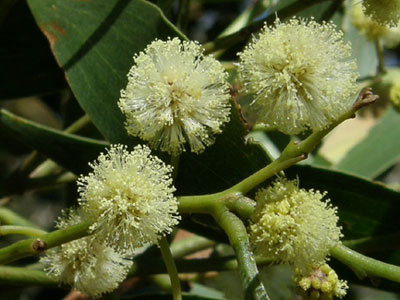 Blackwood (Acacia melanoxylon)  (Alan Page)
On poor sandy mountains soils wattles are useful in that they have the ability to supply nitrogen through root nodules and thus will be flourishing where nothing else will grow.

Acacia melanoxylon is a fine timber tree often seen on the high mountains. A shapely tree for cultivation.

At Glenbrook near the Plant Reserve, A. elongata used to fill the swamps with bright gold. It still exists in the reserve.

The Sydney Golden Wattle is found in many parts. It has yellow‑gold catkin‑like flowers, and grows into a small tree. 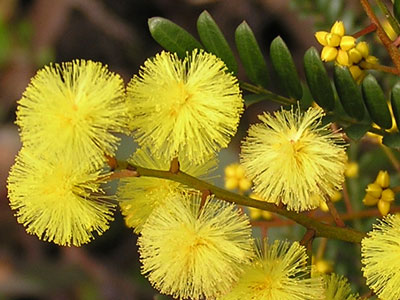 Sunshine Wattle (Acacia terminalis)  (Alan Page)
Along Bell’s Road may still be seen the abundant blossom of A. floribunda, a fine specimen of which grew in Katoomba hospital grounds for many years.

On the higher mountains the sunshine wattle, A. botrycephala 3, lines the winter roads with its deep golden flowers. In other parts this species has very pale flowers and grows into a very tall shrub.

Near Lithgow, A. buxifolia is outstanding and well worth cultivation. 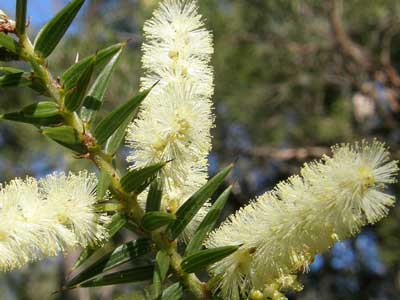 Spike Wattle (Acacia oxycedrus)  (Alan Page)
It would be impossible to do more than write a list if all the lovely wattles were mentioned, but in addition to these well-known species are some lovely rare and interesting plants.

Acacia oxycedrus is limited to lower mountain distribution, and can be seen near the road at Faulconbridge.

In the same locality may be found one of the really tiny wattles A. pumila 5, it grows to a height of about ten inches, on the mountains and has minute flowers in the axils of the leaves. The pods are about an inch long.

A similar plant is known from the higher mountains, A. baueri 6, which has rounded phyllodes, and very tiny flowers. 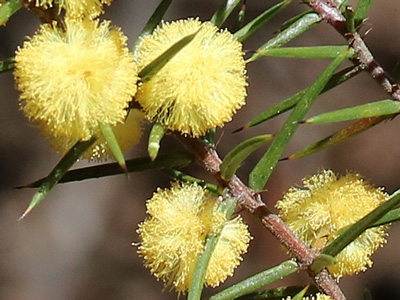 Acacia asparagoides  (Alan Page)
A dainty prickly wattle is A. asparagoides which has small sessile golden flowers, and grows at Bell and Blackheath.

Some wattles (those with pinnate leaves) bear true leaves, but many Mountains species have leaves which are really the modified leaf stalk. These leaves are always tough in texture and have been developed as a means of enabling the plant to exist through periods of drought.

All seedlings bear true ferny leaves at first but phyllodes soon take their place on most plants.

A few wattles bear true leaves and phyllodes on the one plant, as in A. rubida. 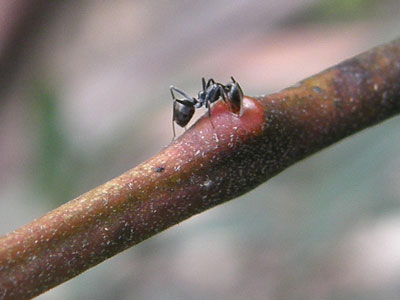 Nectar Gland (Acacia elata)  (Alan Page)
On the leaf stalks of the Cedar Wattle, and many others it is easy to see a small swelling.

These swellings are nectaries which at times are filled with nectar and visited by ants. I have seen ants stroking the nectaries on A. elata but could not ascertain whether they were able to create a flow of nectar in the way they encourage aphids to provide food.

On phyllodes the nectary may often be seen a considerable way along the margin of the leaf.

Finally Acacia seeds do not need hot water or fire or nicking in order to germinate but better results will be obtained in this way if full germination is needed. In nature vast numbers of seeds provide not plants but food for fauna, and wattles may remain dormant in the soil for many years.